THE ORDER OF FREE GARDENERS

Recently Bro. Bob Cooper, Curator of the Grand Lodge of Scotland Museum and Library published an excellent book on the Order of Free Gardeners.

It gives an insight into a Fraternity whose emblems and degrees were similar to that of Freemasonry, although not so ancient as our Craft had existed for three hundred years before it`s dramatic decline in the early part of the twentieth century.

The emblems of the Order which are reproduced in the centre of this page are very similar to the emblems of our own Order. In this case the square and compasses are in regular form, but instead of the letter `G`, the Gardeners emblems have an open pruning knife. 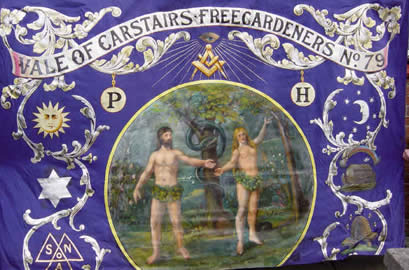 It is certain that the ancient Hawthorn Lodge which existed in Bothwell in 1796 was established by the large number of `operative` gardeners who worked on the Bothwell Castle estates. But what of the origins of this Order which was almost certainly established in Scotland many years before England and Ireland and was it just a fraternal organisation are did it in ancient times like our own Order had an `operative`beginning.

The earliest evidence of the existence of the Order is from a minute book dated 16th. August 1676 which begins `Interjunctions for ye Fraternitie of the Gairdners of East Lothian` and consists of fifteen regulations.

In an entry dated 1 May 1677, 66 members sign a `Bond` which they pledge to keep good order and improve pride and honour of local Free Gardeners. n Scotland, the 17th. century was marked by considerable civil unrest due to the Covenanting Wars, following the signing of the National Covenant in 1638, a protest against Charles 1`s ecclesiastical innovations. After the Restoration of the Stuart monarchy in 1660, Episcopalianism was reintroduced into Scotland in 1662 and the successors of the signatories of the National Covenant marked the second phase of those wars which continued until about 1689. The estate of the Duke of Lauderdale (1616-1681) was Thirlstane Castle (approx. 17 miles from Haddington). As Commissioner to the Scottish Parliament and Secretary of State, he was virtual ruler in Scotland. His influence was particularly strong in Haddington where he owned part of an Abbey`s Estate. 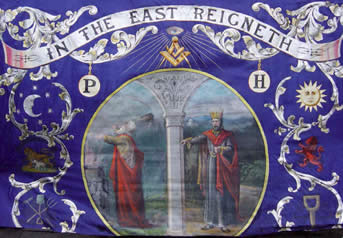 During 1679 the town was in turmoil. The Duke of York, who became King James V11 (James 11 of England) in 1685 came to Scotland as Royal Commissioner. Lauderdale was responsible for receiving him in East Lothian and ordered that a banquet for 2000 people be provided by the Haddington township as part of that reception. By 1688 the Covenanting Wars were drawing to a close but in that year troops of John Graham of Claverhouse (1648-1689) were quartered in the town, partly at the town`s expence, in order to suppress the Covenanting tendencies of the population. The period of 1670-99 was also marked by periods of intermittent famine and may also help to explain the absence of full minutes during that period.

The severe famines of 1674 and 1675 might well have prompted the initial decision to formalise the, then, existing association of gardeners in the area. During the 17th. century the formal gardens of the Crown and nobility began to be copied by lesser nobility. The formation of the Order of Free Gardeners roughly coincides with the growth in interest and application of Renaissance architecture by wealthy landowners and the need for a large number of working gardeners. The adoption of classical landscape gardening as a foil to such edifices is probably best known in Scotland from the work of John Reid (1655-1723). His thoughts on `pleasure gardens` are recorded in his book The Scots Gard`ner and repeats the formal designs of the time. The evidence available shows that one Lodge at Haddington existed in the late 17th. century and one early in the 18th. at Dunfermline. Three others came into existence in the late 18th. century at Bothwell, Cambusnethan and Arbroath.

On 6th. Nov. 1849 a meeting was held at Lasswade, Midlothian, to which all known Lodges had been invited to form a Grand Lodge. Following the meeting, many Lodges previously unknown to each other came into contact. Through the diligence of the first Grand Lodge Office Bearers more Lodges were identified throughout Scotland and made known to each other.

The mid-19th. century records an explosion of new Lodges. By 1859 the need for better organisation became apparent and a meeting of Lodges was called to be held in Edinburgh at which "upwards of one hundred Lodges were represented". The principal subject of debate was the form the Grand Lodge should take. The debate centred round whether or not the Grand Lodge should be a single permanent body, have a Provincial Provincial structure or to have a nomadic Grand Lodge as the Free Gardeners had in England. The details are not clear but a compromise seems to have been reached with the formation of an Eastern Grand Lodge and a Western Grand Lodge. The Lodge at Dunfermline received an invitation to join `the` Grand Lodge, an invitation which was declined. Twenty Gardeners Lodges were known to exist before 1849 - before any central organisation. Following the formation of the first Grand Lodge

in 1849, 69 Lodges were formed including three in America and one in a local militia force. The last Lodges, so far as can be ascertained, were formed in 1905.

It is also interesting to note that as with Freemasonry, the Ancient Order of Gardeners admitted gentlemen at an early stage in its development, at a higher fee than that of a gardener. From the outset then , the Order accepts the admission of non-gardeners at a premium. East Lothian was, and is an area of rich agricultural land and had, and has, many large country houses. Haddington is the county town and having a Lodge situated there was quite logical as this was the centre of country activity. Other centres of population were relatively small and it was to Haddington that local lairds would come, certainly on market days, to conduct business and recruit workers, including gardeners. 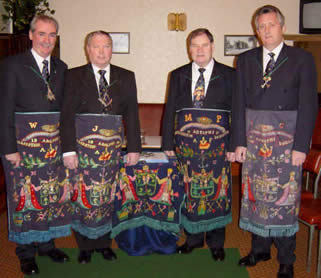 The Lodge would have been the central point of contact. In essence the Lairds had nothing to do with the `craft of gardenery` but the mutual benefits of a closer association between the two social groups was recognised by the Lodge, as indicated in the Constitution, and the admission of `Noblemen, Gentlemen` was clearly of financial benefit to the Lodge. It also is likely this involved an element of legitimising the Lodge especially given the lack of any official status. It is more difficult to assess what non gardeners

gained from joining. It is possible that they satisfied their curiosity and/or sought advice. An element of voyeurism cannot be discounted.

The minutes of the Lodge show that it provided practical assistance to land owners particularly in supplying produce. For example, in 1693 the Laird of Athelstoune bought two dozen `colliflowers` and the Laird of Nunland bought one pound of leek seed. This record is during the last great period of famine which lasted from that year until 1699. By 1704, the supply and sale of plants and seeds had ceased or at least this activity is no longer recorded in the minutes. This might indicate that immediate need to have such a basic insurance against food shortage had receded. Further regulations are concerned with the control of the gardening craft. For example, no Brother shall, `intyse or seduce his Brothers Prentice or Servant or procure ane service for him without his libertie first had and obtained` and `Brethren admitted shall give his best council to his Brother for Levelling, Contryving, Planting and Dressing of Ground.`

Display Cabinet. Bro. Bill Perry, P.M., Sec. Lodge Robert Burns No. 440 has kindly lent a Gardeners Apron which belonged to a member of his family. The Apron will be on display during April, in the display cabinet in the foyer as a supplement to this article.

Bob Coopers book can be obtained from Grand Secretary priced £10.

Our thanks to Bob for his permission to reproduce information from his book.